A subdued swell gradually lifted the boat as we made our final exit out of middle harbour and onto Sydney harbours lower reaches. As we rounded Grotto point we entered a whole new ballgame. Within a mere few hundred meters we had moved from the relatively tranquil estuarine environment of middle harbour straight into near enough to full ocean conditions.

Sydney heads are wide and deep and at times these lower reaches cop the full brunt of the oceans swell. A heavy blow from the south will whip up a chop that can compromise the safety of even the sturdiest of trailer boats. Washaway beach located in the lower harbours north-east corner is so named because it does exactly that —- washes away. In severe south east weather this white sand topping has been known to be recede back to its clean rock bed. I am talking about an inner harbour beach here, so it must be understood that I’m warning of the possibility of some quite serious conditions. Most of the time though   the lower harbour is a pleasure to be on in a boat even as small as twelve foot.

As we rounded the point the early, October chilled, valley air merged into the noticeably warmer sea mist. We cruised our way over to north harbour where the spot lock motor was set along the edge of our favorite John dory hole. A block of burley was slashed open and dropped still frozen into the burley pot. Within minutes the yakkas swarmed and within twenty minutes the live bait tank was at capacity.

Swarms of bait fish is what the burley had attracted to our boat, so it was no great surprise when the rod twitched and buckled to the weight of our first John dory. The characteristic honking of this fish was still sounding as our second and then third hit the deck. As number four gave his final grunt the first of the trevally materialized in the burley trail. Unweighted peeled prawns brought them unstuck one after another. Any that made it further back were wolfed down by stud winter bream and should one be lucky enough to drift to the bottom it would find itself savaged by hordes of leather jackets.

And a weather front was exactly what was brewing on our southern horizon bringing a quick end to our lucrative session.

The transitional period from September to December, if not the most productive time of year, is certainly a time for mixed bags. The winter species linger while the first of the summer species make their move in. The lower reaches are generally more productive at this time of year as the shallower upper reaches chill right down. 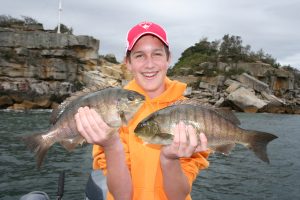 The exception to this is Luderick which make an upstream spawning migration during the colder months. Also, commonly known as blackfish the luderick are primarily a vegetarian. Having said that there are times when they will be found feeding exclusively on squirt worms. I’ve also caught them on yabbies and peeled prawns aimed at bream and have even heard of a few being caught on lures. Weed is the bait to use ninety five percent of the time. In the lower reaches of the harbour cabbage or the fine hair weed found on ocean rocks is the go. For the upper reaches Parramatta weed, which can be found in the mangroves or storm water drains of the upper harbour, is the supreme bait. Parramatta weed can be scarce at times in which case the fine hair weed of the ocean rocks is a fair alternative. Burley helps immensely in congregating luderick and finely chopped weed mixed with sand is the way to go.

They are a fairly abundant species and can be located throughout the system from the salt water limits to the heads. Prime blackfish haunts include deepwater rocky points particularly where an eddy exists, around jetty and bridge pylons, over ribbon weed beds and in the lower reaches around the deep-water rocky foreshores particularly where there’s a bit of weed and a bit of wash.

Tackle is fairly specialized. Long rods of at least nine ft are almost essential as is a floating line. Choice of reel is either a threadline or centerpin. My personal choice is for the threadline. Centerpin reels are still popular based on tradition rather than practicality. A reasonable compromise would be a side cast centerpin but I’ll still opt for the egg-beater. The biggest problem I see amongst estuary Luderick fishos is a tendency towards over sized floats. Keep them small and light. The old quills are hard to beat, if you can get them, as are some of the course fishing floats relatively new to the market. Finish off the rig with a number 8 or 10 sneck hook on a 4kg leader (clear mono) enough lead to render the float near neutral buoyancy and you’re in business. 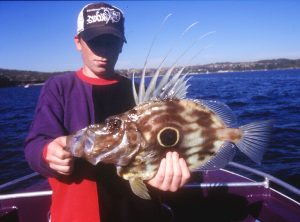 Those freaks of the deep the John Dory are another late winter inhabitant of Sydney harbours lower reaches. They love deep still clear water so the deep bays out of the main current are the sort of areas to start looking. Distribution through the harbour depends largely on rain fall. They won’t go into murky or fresh water, so I would imagine Gladesvile on the harbour and Bantry Bay on middle harbour would be about their limits. North harbour, Bantry Bay, Rose bay and most of the jetties east of the harbour bridge are prime spots.

Heavy concentrations of baitfish are a major draw card when hunting Dory. As a consequence, your favorite live bait catching ground is quite likely to be a good Dory spot. You know that favorite deep hole of yours on the harbour which fishes well but has the major drawback of hordes of cockney bream —— probably a top dory spot that one.

Of all the dory I’ve ever caught only one has fallen to a dead bait.

Live baits are essential. The best includes Mado, Sweep and yakkas. I was fishing off the mosman jetty (back in the good o’ll days before public jetty fishing was banned) when I hooked and landed a telephone, which had obviously been flung from one of the waterfront apartments. A bit later I hooked and landed a dory. The sad thing was that there was very little difference between the fight of the two. So tackle for dory does not have to be very sophisticated. I fish a basic threadline, six kg rod and reel outfit. Suspend the livey about two meters above the bottom, either straight up and down under the boat or under a glitter bug float if your shore based. An ultra sharp octopus style hook in 4\0 or 6\0, depending on the size of the bait, is the most important part of your dory rig. 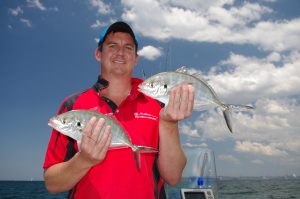 Trevally are another late winter species that share a similar habitat to the dory. They like deep clear water but unlike the dory they don’t mind a bit of flow. Another big difference is in the fight — the trevally would bull a string of six dory backwards.

There’s big concentrations of them in the lower Harbour for most of winter and spring. They will stray upstream in dry weather and are often encountered by bream fishermen in the mangrove areas. Sow and pigs reef and north harbour are renowned trevally grounds.

Not a lot unlike yellowtail, burley will send them nuts. Reel drags need to be well in tune and once again sharp hooks are a must. I use a bait holder pattern in either no’s 2 or 4. Despite the trev’s fighting ability light lines are a must. Four kg is ample and any heavier than this will see too many pulled hooks as trev’s mouth tends a bit on the soft side.

Once a burley trail is established soft baits like peeled prawns, cubes of skinned and filleted yellowtail, nippers and pilchard fillets are floated down the trail unweighted. If it’s windy or the currents exceptionally strong then add a little bit of lead.

Trevally don’t freeze too well but bled and iced immediately they make a quality feed.

As things begin to warm up a bit in September the salmon will start to school up in big numbers. They respond well to live bait, trolling or lure casting and are easily detected as they turn the surface to foam as they hack into the new seasons bait fish. Look for the flocks of wheeling screeching seagulls and terns. The most critical aspect to catching the salmon is matching the hatch. Start off with a metal slug type lure of about four inches and work your way down in size until you find what they are feeding on. Cast the lure along the edge of the school and retrieve at a medium to fast pace. Salmon are one of the Harbours most spectacular sport fish and one of the worst eating. Bled immediately and iced down they make excellent compost. Alternatively, they can be released and caught again next season. 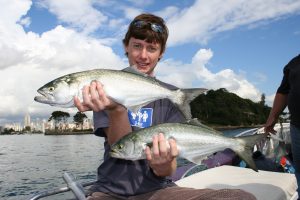 Tailor are renowned as a winter fish but personally I believe that their peak is in oct\nov when they school up and go nuts on the influx of new season pilchards. Tailor are in the harbour all year. They main difference in winter is that they rarely feed on the surface and are bigger. You can still take them on deep diving lures early in the morning or on live baits fished in the deep holes but if you want some whoppers try night fishing around sow and pigs reef and the shipping channels.

From late October through to December is the peak period for mixed bags as the winter species linger and the first of the summer species start to move in.

You might pick up the first of the bonito or kingfish while trolling for salmon or tailor or you could bag all four. Dory fishermen will find the odd quality flathead start to turn up in their bag and bream will move into the burley trail set for trevally. The squid are at their peak and the blue swimmer start to make their move.

There’s a down side to this increase in fish numbers though and that is the increase in general boat traffic. And that doesn’t just include fishermen either, pleasure boaters and that most frightfully inconsiderate creature of them all, the racing sailors, also start to come out of hibernation. Weekends on Sydney Harbour in the height of the season will really test your patients not to mention your boat handling skills.