How to catch Pelagic Fish — part 2

All the pelagics , even silver trevally , at one time or another will work bait on the surface . At these times they can be visually located, often kilometres away,  by looking for the accompanying flocks of seabirds cashing in on the left over baitfish. Not every surface feeding school has birds but even they can be visually located just by looking for the surface disturbance. Obviously good sea conditions make the job a lot easier .

There are times when the erupting schools will be heard before they are seen. 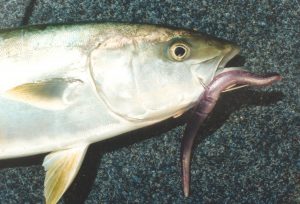 When the time comes to approach the school there are a few things to keep in mind. Don’t charge right up to, and never into, the feeding school as this will almost certainly put them down. There exceptions to this, where a rapid approach is essential. Certain species will , at times, feed in very short bursts and if you are not there quick time you will miss your shot. You must approach fast but keep your distance. The obvious distance to pull up is at the extremities of your personal casting range.

A classic example of fish that feed in quick bursts are northern bluefin or strippies. A common mistake made in this situation is for anglers to take a slow , cautious approach to these schools . Most fishos conclude that the fish disappear when their boat approaches as a result of the fish being spooked by the boat. Occasionally this is probably true but if you sit back for a while and just observe their feeding pattern  it soon becomes apparent that they are feeding in short bursts regardless of whether the boat approaches or not.

Its generally just coincidence that the time you take to get to them is roughly about the same time as their feeding bursts.

This short burst  feeding pattern could be the result of the fish trying to avoid becoming prey, themselves, to sharks or marlin etc or it could be linked to loosely schooled baitfish or even a herding tactic. When they are feeding like this the slow cautious approach will gain nothing but frustration. Drifting  in the general area and waiting for the fish to come by the boat occasionally pays off . I’ve found the best approach it to get just within casting distance as quickly as possible and let fly. Speed is the essence in this situation.

You must consider your boat shadow as this will put fear into your school long before the engine noise. Shadows are the early warning sign of a large predator where engine noise is unfamiliar and fish have proven to be to be far more wary of dangers that they are familiar with. The basic rule is to never get between the sun and the fish.  The lower the sun is in the sky the more this applies. 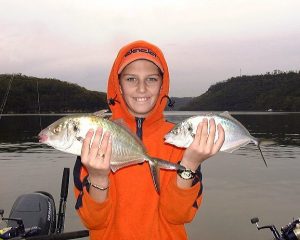 Try to anticipate the direction that the fish are moving and be sure not to but your boat in their path.

In windy conditions you can use the wind to make a quite approach on a school but position your drift to take you alongside the school and not over the top of it.

With experience it becomes possible to identify the species by the manner in which they are feeding. The benefit of this aids in lure selection and rig. For example , you don’t want to throw your favourite soft plastic at frenzied tailor. You might decide to rig a short length of wire ahead of your fly if you know you are dealing with tailor but would definitely steer clear of wire if you knew they were mac tuna.

Lure selection in these situations is more a matter of size than type or colour. You are all familiar with the concept of ‘matching the hatch’ but how do we determine the hatch. The term arose in the trout fields where the hatch was quite obvious. It was probably airborne and tangling in your big moustache or tweed hat. It’s not always that easy when your hatch is under water.

Seabirds help a lot. They won’t even show up unless it’s worth their while. A birdless patch of feeding pelagics usually indicates that the prey is very tiny. And to the other extreme, the bigger the patch of birds the bigger the prey.    Tiny bait inhaled whole leaves little to interest a seagull but a four inch pilchard chopped in half by a tailor or stunned by a crushing blow from a kingie certainly provides an easy and worthwhile target

If you are lucky you might even  see the prey as it showers from the water in an effort to escape. If all else fails start with your smallest lure and work your way up. Fish honed in on a certain size prey will regularly eat something smaller but rarely anything bigger.

It is generally accepted that a high speed retrieve is essential for pelagics which is true if you are using weak actioned lures like metal slugs. Strong actioned or slow sinking  lures like flies, spoons, minnows and soft plastic stickbaits do not require the same speed to entice a strike. The problem with metal slugs is that they are so un-lifelike  on a slow retrieve. 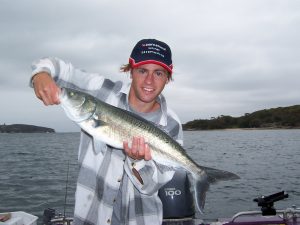 Never assume that the fish you are seeing on the top are necessarily the fish you are catching. In these situations it is not uncommon for fish of different species to layer , ie Salmon on top , bonito under them and then trevally under them.  Your first few casts should be retrieved immediately but later casts should be allowed to sink to varying depths before the retrieve.  Many pleasant surprises have come from this technique.

Silver trevally rarely feed right on top but are quite common below the winter salmon. They will take lures at these times , often on the fall.

Kings are regulars below tailor and bonito . The first sign  of them is when one follows a hooked tailor or bonnie up to the boat.

Kingies are the easiest of all the pelagics to locate but usually the hardest to catch. Their biggest downfall is their love of shade but to some extent it’s also their savior. Structure creates shade . Structure is very easy for us to locate but it also gives the kings something to wrap us around. They will face into the current when they are holding

Avoid lures that rattle for kingies and that includes anything with trebles and split rings. Sluggo is no.1 but you will occasionally get away with poppers as the splashing sound helps mask the rattling of the hooks and rings.

Bait fishing for pelagics is highly effective but generally takes second option to lure fishing. Its far more effective on some species than others. The fish that hold like trevs, kings and tailor are more susceptible to bait fishing , even cut baits , than  the various  tunas. The major difference between the two is that with the holding fish you go to them but with roaming fish you must wait for them to come to you.

Burly plays a big role in both styles . With the holding fish burly will be a direct attractor. Although mac tuna or bluefin, for example, are unlikely to be attracted directly by your burly they will most certainly be attracted by the bait fish that have congregated in your burly. 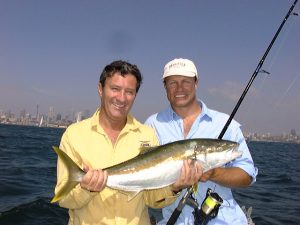 The only thing yellowtail have going for them , as a live bait, is their abundance. The effort to obtain poddy mullet , slimies , gar , pike , hardyheads and squid will be rewarded leaps and bounds ahead of yakkas. Yakkas under 10cm are a good bait but they are not common.

Don’t always assume that live baits will out fish cut baits. When it comes to chasing kings a squid head or even a squid strip is usually the first and often the only bait to go, despite live baits swimming right alongside. As a matter of interest the same applies to jewies(jew fish are not pelagic).

Trevally are targeted  with cut baits of tuna , pealed prawn or pilchard and occasionally with live yabbies or worms. Their mouth is too small for most of the live fish baits that we will offer them.

Tailor are similar in regards to cut baits although they will rarely turn down a live bait. 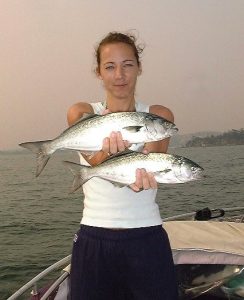 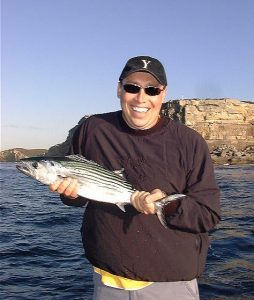