How To catch Squid and Cuttlefish in Sydney Harbour

The popularity of squid fishing in our major population centers has grown immensely  over the last decade . This has been brought about by both an appreciation of their culinary value via Australia’s integration with  people from other cultures and a realization  of their potential as bait .There’s two types of squid that are commonly available in the rivers,bays and along the coast line. The smaller Arrow or Common squid is abundant in the rivers and estuaries while the big Southern or Calamari squid is more common in the harbours, bays and along the coast. The big southerns are even found on the shallower offshore reefs. Small ‘Mourning cuttlefish’ are also abundant in the harbour and make exceptionally good kingfish bait.The common squid are found in the still ,quite bays  in the mid reaches of rivers and harbours. They will tolerate discoloured water to some degree but do have their cut off point. It is unusual to find them too far up stream. Of course this depends on how much rain a system has received. Southerns and arrows do overlap in a few spots. Southerns are very rarely found up stream and seem to like areas that have at least some ocean swell. Its quite easy to tell the two apart. Arrows are long and thin  and pink in colour. Southerns are fatter through the width and are  dark brown to black with a distinct fluro green stripe running down each side of its body Generally southerns are much bigger and also have green  eyes . The definitive ID is in the fact that the wings on an arrow only run about half way down its body while the southerns run the full length 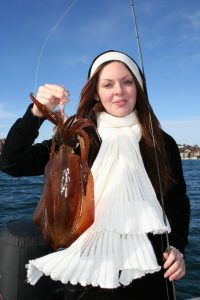 I’ve found it very hard to determine prime tides and times to catch squid. You can try high tide in the morning and do very well only to do poorly on the same tide the next morning but well on the low tide in the middle of that day. Some times early morning will fire regardless of tide and the same for the middle of the day. You can fish on a spot for ten minutes without a touch and then they come on for no apparent reason.  Usually , though , you will get them with -in the first four casts , if they are going to bite at all.I’m convinced that they are always in residence and that on the days that you dud out its because they are not feeding , not because they are not there With persistence you can always pull a few. Most of the time if one spot is firing then all the spots are firing. Occasionally  the first six spots will be dead and then you will find a spot going bananas One thing for sure is that a rapidly approaching  storm sends them absolutely nuts. I’ve been in this situation a number of times and its always been the best squiding I’ve experienced They bite better in the warm water months but are still available in the cooler ones. I’ve found them harder than any fish ,to determine a pattern to their behavior. The good news is , that due to their abundance once you get them wired you hardly ever miss.. Sometimes you will get a heap but you will  , at least ,  nearly always get enough for a bait session. I squided 208 times last year and only missed out  on catching them 3 times.

Southerns are primarily Kelp dwellers and you will find  them virtually every where there is kelp. Most of the good grounds are in close proximity to the shore line , particularly rocky shorelines and headlands. Sometimes they are over reefs. The kelp is usually located visually but if you understand your sounder  it can be used in deeper water. They live in the kelp for both shade and cover. They ambush from cover  the same as snag dwelling fish do.  And just like those same fish ,your chances of catching them diminish rapidly with every unsuccessful cast. In other words, keep moving. Ten minutes in one spot is nearly always long enough.

The arrows are similar in technique to the southerns although they can be found in much deeper water. They generally hang out in the bottom layers and so you will need to let your jig sink for a considerably time in the deeper water. They will sit at the bottom of deep holes in the estuaries , around yacht moorings  , they love ribbon weed beds  and jetty\bridge pylons. Many of the bays in Sydney harbour ,Georges river and Cowan creek on my home grounds  , terminate with a sand bar.  The area where the sand bar drops into the bay is always a good spot. Being a smaller squid , they do prefer the smaller jigs . Paternoster rigs with two jig droppers are quite popular for chasing arrow squid. They are more school oriented than the southerns and when you find the school you can get a lot of squid in a short time. Its not uncommon to hook one and have ten follow it up  . When they are located work quickly.  Once there’s a lot of ink in the water it puts the others off

Cuttlefish are found over sand or shell bottom . They don’t seem as fussy as squid about having kelp or other forms of structure . I’ve found  them on quite open barren bottom. Use very small jigs , the average cuttle is not much longer than your hand. No.1 or 1.5 are good . Cuttlefish are stalkers and move very slowly so adjust your retrieve appropriately . Unlike squid they do not come very far off the bottom so I often put a small splitshot about half a meter above the jig to help keep it near or on the bottom .  It pays to occasionally let your jig sit still on the bottom for a while . This suits the cuttles hunting style and they will often pick it up off the bottom while it is stationary .

Presentation of the jig is of utmost importance and requires some practice.  First cast it well away from the boat and let it sink. The question of how long to let it sink is where the practice comes into play. Let it sink too long and you’ll snag , too short  and you won’t be in the strike zone. Just like catching  snag dwelling fish on lures , squiding is all about strike zones. When they are really on the bite they will come out for a poorly presented jig but when they are slow is when good presentation will count. You will lose a few more jigs in the initial learning stages. Losses can be minimized by using line of no less than 6kg breaking strain , preferably 10 kg. The average depths that you will be working is between 6 and 30 feet. Once the jig reaches the required depth ( 3-6 ft from the bottom).Then give it a swift but smooth jerk for one full sweep of the rod. Then let it sit again for about five to ten seconds before giving it another jerk. Repeat this process all the way back to the boat. Obviously you will need to work it a bit faster in  shallower water. The squid will nearly always grab it on the rest period.  Keep an eye on the water as the jig nears the boat  as squid will often follow it right up . If you see them following it just let it rest  still until they hit it.  Sometimes three or four will follow it up and with quick action you can catch them one after another. If you catch a really big southern ( that is around 750 gms or more) make sure that your next cast goes back  in exactly the same spot . Most of the time there will be another big one Once you hook a squid  just keep a steady pressure on it and retrieve it slowly. If you try to rip it in too fast you risk pulling the jig out or pulling a tentacle off

What makes a good jig?  .Balance and jag sharpness are the two key factors. Before I go any further I must highlight the point that I am referring specifically to the prawn imitation jigs . Yamashita are my personal favourite  and while a bit on the pricey side they are superbly finished and do out fish, and outlast, other brands. With squid jigs , you get what you pay for. 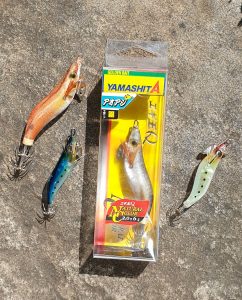 The only alternative that is worth a try is the  spike style.  That’s the one where you feed a pilchard or similar bait down onto a spike that has a jag on one end and a tie off point on the other   These are worth a try if all else fails  but that’s hardly ever necessary. They are a very good option for ‘passive’ squidding . Just simply suspend one under a float and let it sit there while you attend to other fishing . The jags must be needle sharp. The jig must sink slowly and horizontally. If it sinks rapidly and head down get out your pliers and trim the lead weight until it sinks properly. Pink and orange coloured jigs nearly always fish better than the blues and greens. The ‘natural’ and ‘clear prismatic’ colours can also be very effective.

Squid can be kept alive for a long time providing you don’t over crowd them and have a circulating live bait tank with a good flow. A bubble aerator doesn’t cut it with squid but can work for cuttlefish so long as you keep the water clean with regular changes.,Try not to handle them to much .In fact there is no need to touch them at all. Simply hold the squid over the live bait tank and turn the jig upside down. It should fall straight off.

Don’t under estimate the importance of squiding  in relation to your fishing success. The best jewie and kingie fishermen  that I know , are also the best squiders

Pics and article by — Craig McGill 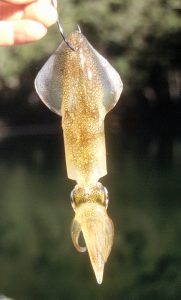 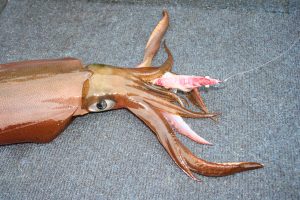 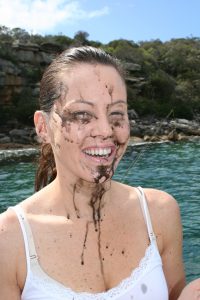