How to Catch Salmon in Sydney Harbour

Australian Salmon have become a year round proposition in the last couple of seasons but October through to January is traditionally the time when they appear in the lower reaches of the Harbour and Broken bay. The closing of the cannery at Eden has seen decreased commercial pressure on stocks in the last decade and it appears that numbers have increased quite dramatically .  Salmon fishing has been sensational over the last few years and should continue providing the commercial fishos don’t start hitting them again 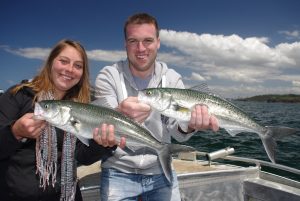 The lower reaches of Sydney Harbour is salmon heaven. This is mainly because it is also baitfish heaven . Sydney harbour  is a harbour and not a river. This might sound like a bad case of stating the obvious but the differences are often over looked. The Hawkesbury river has the depth and the baitfish but not the salmon.  This is because the Hawkesbury pumps huge volumes of fresh water into the ocean . This creates two conditions unfavorable to salmon  — lower salinity and turbid , low visibility, water . Pelagics are physically less able to deal with fresh water than estuary fish like bream or mullet for example. They are also visual hunters  so clear water is an obvious advantage. Having said that  , the lower reaches around Broken bay can be a salmon hotspot providing there hasn’t been too much rain upstream.  The harbour , on the other hand, has a tiny freshwater catchment when compared to the Hawkesbury and, except in times of severe flooding , remains clear.  Why depth is so important to salmon is not so obvious . It certainly gives them another option when fleeing from predators but mostly it gives those sensitive, lidless eyes a break from the midday sun.  Coastal harbours are a baitfish magnet being warm, still and clear . They obviously supply the nutrients they require as well.    So Sydney Harbour has it all — masses of food and clear  deep saline water.

Most people I know would rather cast to salmon than troll for them. What do you do though if you want to cast a lure or fly to pelagics but can’t them on the surface? Troll until you find them and then cast. Trolling lures is a legitimate fish finding tool , even if you do not like or intend to catch them this way. Trolling lures is a great way of finding salmon. Trolling the headlands , particularly north , south and middle heads is the preferred option when the fish or the baitfish cannot be visually or electronically located in open water. Of course with their highly mobile nature  salmon can be expected to turn up anywhere and we have even caught them as far upstream as bantry bay in middle harbour.   In fact strong concentrations of bait fish have been known to lead them well up into the mangrove country but this is the exception rather than the rule. 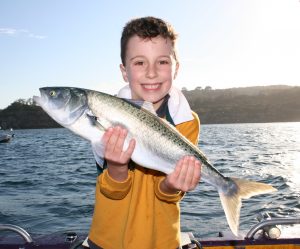 Trolling is best done with minnow style lures. Metal baitfish profiles and skirted type lures the likes of Christmas trees are good when the fish are high up in the water. Those types of lures will ride high at the trolling speeds required for pelagics (4-8 knts). Minnows offer deep diving capabilities or at least reliable depth control. A trolling pattern must be established in order to locate the concentrations of fish. This usually involves a close run first and then moving a little bit wider on each run after that. Troll both directions on each run because its common to find fish biting in one direction and not the other. Keep an eye on; your sounder for baitfish concentrations , other boats trolling to see where and  what they are catching and so you don’t run into them, birds working the surface , current lines and most importantly knarly waves , bombies etc. 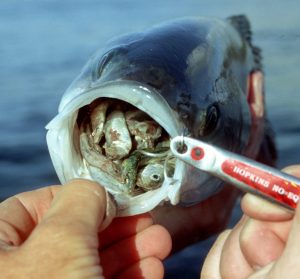 Salmon regularly work bait on the surface . At these times they can be visually located, often kilometers away,  by looking for the accompanying flocks of seabirds cashing in on the left over baitfish. Not every surface feeding school has birds but even they can be visually located just by looking for the surface disturbance. Obviously good sea conditions make the job a lot easier .There are times when the erupting schools will be heard before they are seen.  When the time comes to approach the school there’s a few things to keep in mind. Don’t charge right up to, and never into, the feeding school as this will almost certainly put them down. There exceptions to this, where a rapid approach is essential. At certain times they will , feed in very short bursts and if you are not there quick you will miss your shot. You must approach fast but keep your distance. The obvious distance to pull up is at the extremities of your personal casting range. You will probably be sharing the school with many other boats , especially on weekends , so keep your wits about you in respect to navigation. What ever you do don’t go charging through the middle of the school as it will put the school down and attract plenty of verbal abuse your way from the other boats

As frenzied as these feeding sprees often get the fish will not tolerate a boat being driven straight through the school. Regardless , this is a situation that I confront every weekend on the Harbour. Three or four boats will approach the out skirts of a school slowly and quietly and will be in the process of being rewarded for their stealth when from out of nowhere some clown will go powering right through the middle putting the fish down immediately. If you power through a gathering of any type of animal (except maybe sheep) they will scatter so why do these morons think that fish are going to be any different. I’ve found the best approach it to get just within casting distance as quickly as possible and let fly. Speed is the essence in this situation. You must consider your boat shadow as this will put fear into your school long before the engine noise. Shadows are the early warning sign of a large predator where engine noise is unfamiliar and fish have proven to be to be far more wary of dangers that they are familiar with. The basic rule is to never get between the sun and the fish.  The lower the sun is in the sky the more this applies. Try to anticipate the direction that the fish are moving and be sure not to but your boat in their path.  In windy conditions you can use the wind to make a quite approach on a school but position your drift to take you along side the school and not over the top of it. 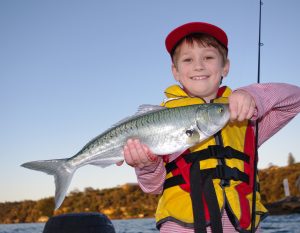 Lure selection in these situations is more a matter of size than type or colour. You are all familiar with the concept of ‘matching the hatch’ but how do we determine the hatch.Seabirds help a lot. They won’t even show up unless its worth their while. A birdless patch of feeding salmon usually indicates that the prey is very tiny. And to the other extreme, the bigger the patch of birds the bigger the prey.    Tiny bait inhaled whole leaves little to interest a seagull but a four inch pilchard chopped in half or stunned by a crushing blow certainly provides an easy and worthwhile target .   If you are lucky you might even  see the prey as it showers from the water in an effort to escape. If all else fails start with your smallest lure and work your way up. Fish honed in on a certain size prey will regularly eat something smaller but rarely anything bigger.

Never assume that the fish you are seeing on the top are necessarily the fish you are catching. In these situations it is not uncommon for fish of different species to layer , ie Salmon on top , bonito under them and then trevally under them.  Your first few casts should be retrieved immediately but later casts should be allowed to sink to varying depths before the retrieve.  Many pleasant surprises have come from this technique.

pics and article by — Craig McGill