How to catch Pelagic Fish — part 1

Finding food is  number one priority for any fish. Very occasionally their attention turns to  other needs  but whatever the distraction, their thoughts must soon come back to food.  The one thing that does vary between the different species is the volume of food that they require. Flathead are a classic example of a fish that can ‘sit’ on  a decent feed for days. The nick name lizard  was derived from their appearance but flatties actually have  a lot more in common with their namesake  than just a hideous head.  Pelagic fish are  the opposite  requiring a continuous turnover of sustenance. The reason for this  is that they are constantly on the move and burning energy at a high rate.   Just because you are not catching flathead does not mean that they are not there . With pelagics it is reasonable to assume the opposite. If you are actively fishing for pelagics for more than a few days and not catching them then they are probably elsewhere. 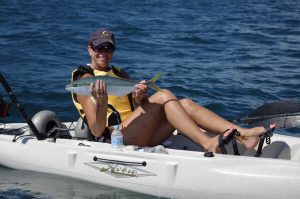 The lower reaches of our city bays and harbours are pelagic heaven. This is mainly because it is also baitfish heaven . 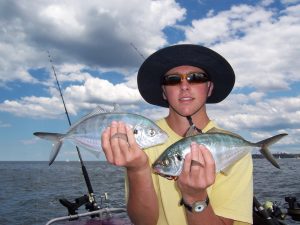 The larger rivers have the depth and the baitfish but not the pelagics.  This is because the they pump huge volumes of fresh water into the ocean . This creates two conditions unfavourable to pelagics  — lower salinity and turbid , low visibility, water . Pelagics are physically less able to deal with fresh water than estuary fish like bream or mullet for example. They are also visual hunters , so clear water is an obvious advantage.  The bays and harbours , on the other hand, have smaller freshwater catchments when compared to the rivers and, except in times of severe flooding , remains clear.   Why depth is so important to pelagics is not so obvious . It certainly gives them another option when fleeing from predators but mostly it gives those sensitive, lidless eyes a break from the midday sun.Coastal harbours are a baitfish magnet being warm, still and clear . They obviously supply the nutrients they require as well.

The bulk of the action happens when the water is warm. 19 to 21 degrees is optimum in an average year but occasionally it climbs as high as 25.  When this happens the kings clear out but the compensation is in the form of an influx of    tropical species. Salmon , trevs and bonito are comfortable somewhere between 16 and 20 degrees making them a good winter stand by although any of the pelagics can show at any time.

Even within the pelagic group there are variations in the type of food and the quantity required. The tunas , with the exception of Bonito ,  appear to never stop swimming where as the likes of kingies, tailor , salmon ,  trevally   and to some extent bonito , will ‘hold’.  It appears that these less active pelagics can ‘switch off’ for short periods when conditions are not favourable .

Tunas like northern bluefin , striped , mackerel and frigate are always swimming and always looking for a feed . If things become unfavourable for them they simply move elsewhere.

If conditions are bad enough for long enough any of the pelagics will move . 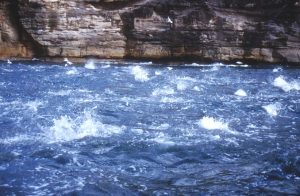 What does all this mean to us fishos.? Well , When things turn bad for the tunas  you are probably wasting your time persevering with them.  They have moved to another area and probably won’t come back until conditions are good again. It is generally no good deciding that you are going to work hard for these fish because if they are not there then you can’t catch them.       With the fish that ‘hold’ perseverance will eventually pay off — they are still there waiting for more favourable conditions . Even in bad conditions these fish can be tempted with the right bait or lure put in the right place. The fish are still in the system and as long as they are there you have a chance of catching them.

Although most of the pelagics make much better table fish than they are credited for they are primarily sought after as a sport fish. I don’t intend to do recipes or preparation of individual species but there are a few golden rules for pelagics if they are to be kept for the table.

-Fillet and skin just before you intend to cook them.

-Most pelagics don’t freeze well although trevally, kingfish amberjack and Samson are ok for a few months.

-The species that don’t cook up to well, will probably be good sashimi. i.e. frigates strippies and mac tuna

-Fillets are best cooked as you would a rare steak. Overcooking will dry them out.

Australian salmon are the exception and fully deserve their reputation as revolting. A mate of mine recons he has a recipe for salmon but it must be remembered that he thinks that ‘mud’ is one of the five groups. 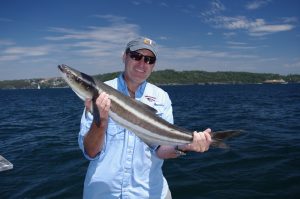 Complimenting their sporting abilities all the pelagics will readily accept lures. Trevally are not regulars on artificials but when they do switch it on the same rules apply.

Trolling lures is a great way of finding some species. It works exceptionally well on bonito, tailor and spotted mackerel. Its only average on salmon, strippies, mac tuna , frigates and trevally. Its success rate on kingies is relatively poor..Trolling the headlands ,reefs and other structure is the preferred option when the fish or the baitfish cannot be visually or electronically located in open water. Different species prefer certain locations. In Sydney harbor North and south heads produce  lots of bonito but we hardly ever get tailor there. Tailor are much more common along middle head and the run between grotto  and dobroyd points. Of course with their highly mobile nature  any of the pelagics can be expected to turn up anywhere and you will need to explore your specific area to get to know the preferred haunts of the various species. 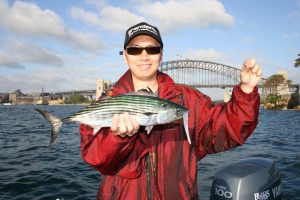 Strong concentrations of bait fish have been known to lead some of the more oceanic orientated pelagics well up into the mangrove country. Don’t discount the shallows either , I’ve seen mac tuna and frigates raid baitfish in 18 inches of water.

Trolling is best done with minnow style lures. Metal baitfish profiles and skirted type lures the likes of Christmas trees are good when the fish are high up in the water. Those types of lures will ride high at the trolling speeds required for pelagics (4-8 knts). Minnows offer deep diving capabilities or at least reliable depth control.

A trolling pattern must be established in order to locate the concentrations of fish. This usually involves a close run first and then moving a little bit wider on each run after that. Troll both directions on each run because it’s common to find fish biting in one direction and not the other. Keep an eye on; your sounder for baitfish concentrations , other boats trolling to see where and what they are catching and so you don’t run into them, birds working the surface , current lines and most importantly knarly waves , bombies etc.

Most people I know would rather cast to pelagic fish than troll for them. What do you do though if you want to cast a lure or fly to pelagics but can’t visually or electronically find them? Troll until you find them and then cast.    You can locate fish by blind casting to likely looking spots but on average it will be a slower process.