How to Catch Luderick in Sydney Harbour

Luderick are still quite prolific having survived the ravages of commercial fishing and pollution  a lot better than most other species. They fight  well, are great to eat and are found through a range of habitats that include the most tranquil estuarine reaches to harsh ocean rock environment. They are well within reach of shore based anglers , inexpensive to set up for and are a year round proposition. They have adapted to , and probably even benefited, from man made structures. The myriad of moorings  , pylons , break walls , marinas and jetties provide them with  food and shelter from both natural predators and  commercial netting.

They are found as far north as SE Qld right along the NSW coastline and round as far as  south western south Australia  They have also been found in northern Tasmania and NZ   They require specific technique  that  can take considerable time to learn , but once mastered the fish flow freely.    Here’s a bit of information on tackling up for blackfish that might help short cut the initial learning curve. 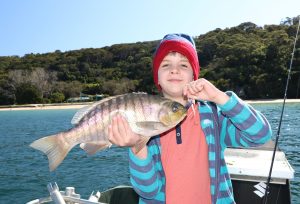 The tricky bit to blackfish fishing is in the control of the rig. Light floats , long drops , wind resistant baits and lots of sinkers add up to a rig that demands constant attention. There’s two ways to go and they both have their good and bad points.

You can opt for the running float rig. This consists of a standard long stemmed blackfish float that is free to run on the line.  It’s stopped a certain distance from the hook by a split shot and stopped from running all the way up the line by a ‘stopper’. The ‘stopper’can be a piece of light string tied to the line or any one of a number of commercially produced rubber ‘stoppers’. The main criteria for a stopper is that it clamps tightly enough to the main line to stop the float sliding any further than you want it to but still must be loose enough that it can be moved up or down in order to change the depth of the drop. It must also be able to be wound through the runners ,sometimes even onto the reel and cast back out again without snagging. The main advantages of this rig is that the length of the drop from the rod tip can be as short as a couple of feet and the maximum depth of the drop below the float is infinite.  This makes it an easy rig to cast and can be cast further than the alternative. The disadvantage is that it is prone to tangling due to the fact that the wind resistant bait is very close to the float during the cast.

The alternative rig consists of a fixed float  . A split shot clamped above and below the float restricts its movement up or down the line. This means that the float is fixed on the line at the full depth you are fishing. The problem with this rig is that if you are fishing deep at lets say ten feet or more you will have that full ten feet of line hanging down from the rod tip. As you would imagine this would be difficult to handle. The big advantage with this rig is that is much less prone to tangling during the cast because the bait is so far from the float . This is the method I use most often. Obviously if you are fishing more than about twelve feet then this rig is not applicable , but this does not occur very often.

Weighting of the float is critical. Most floats consist of a thin stem with a stream lined float of either cork or foam about two thirds of the way up the stem. The float must be weighted so that the cork or foam section is under water leaving just the  one third of the stem above the float showing. The float is weighted with   split shot , running sinkers, strip lead around the stem of the float or a combination of all of these.

Whether conditions dictate the size and weight of the float you will use. In windy rough conditions you will need a big heavy float and in calm conditions the smaller the float the better. A quill float makes an ideal still water float.

When to strike at is a point of hot debate amongst  luderick fishos.  My opinion is that there is no hard and fast formula . If they are biting veraciously then strike quickly and if they are feeding tentatively then give them a bit more time.  Generally it is a good idea to at least wait till your float is completely under water before striking . Sometimes blackfish eat a bait and just sit there in which case your float will hardly move . In this case  , if you see some unusual movement on your float but it doesn’t go under  , it might just be worth striking on spec. On very rare occasions a fish will eat your bait and swim up in the water column (this is common if you are burlying heavy as the fish comes up the burley trail for its next feed ) . With the weight now off  the float will lay down on its side  , this is also time to strike.

The  rods used in blackfish fishing are long and soft for a number of reasons. They are long because  of the need to handle the long drop often used under the float as described above. The extra length also helps to lift the ‘belly’ out of the line when you go to strike. The term ‘Belly’ refers to an ark in the line between the rod tip and the float often created by a cross current or wind. On a long drift , the belly can become so severe that the strike only serves to lift out the belly and sometimes never reaches the float. The rod must be soft because the blackfish’s mouth and the hooks used are small . This combined with a stiff rod would pull the hook clean out of the fishes mouth. The long rod offers the cushion needed to prevent this happening during the fishes strong lunges. 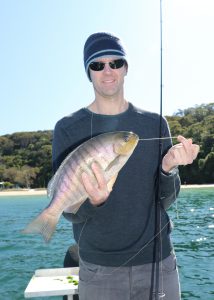 The choice of reel is up to you . I’ve seen egg-beaters , baitcasters and center pins used successfully. Center pins are still used on a traditional basis rather than on their practicality. If you opt for a center pin then go for a side cast such as those made by Alvey . I use egg beaters as they offer open face casting, a fast retrieve which is important when picking up ‘belly’ before striking and the ability to feed line smoothly to the float to allow it to drift.

For the smaller river blackfish  a six pound line and a no. 8 or 10 hook will suffice. The big ocean bronzies will require heavier tackle. A no. six hook would be more appropriate along with a ten or twelve pound line.     Gelspun lines are credited for their non stretch properties. There are situations when low stretch is good but not when blackfishing. Non stretch lines do have a reputation for tearing hooks out of fish — a problem already prevalent with blackfish.   A compensation is  the fact that gelspun lines float. This is a huge advantage when picking up ‘belly’ as it is much easier to pick up a line off the surface  compared to one that has sunk, as do monofilaments. Gel spun line makes an  excellent blackfish line in experienced hands holding soft rods.

Although they can be caught all year round Blackfish are at their best during the cooler months and don’t seem to mind  the cold,  still, clear waters. They are a schooling fish so when a concentration is found they can be taken in good numbers. They can be found right throughout a river  system from the freshwater reaches through to the heads.

Upstream  they have a preference for deep water locations and can be found around weed beds , rocky points ,channel edges and man made structure like bridges , jettys and retaining walls. Downstream they are commonly found around reef systems , rock ledges and break walls.

When selecting a spot to fish consider that you need a bit more room when float fishing than you would when baitfishing. Pulling up to a structure that is already crowded with lure or bait fishos and setting up a blackfish drift is a recipe for crossed lines and tempers.  I’ve seen experienced blackfishos lined up shoulder to shoulder fishing a drift from the shore.  When the last bloke gets to the end of the run he pulls in and goes back to the start of the line for a fresh drift .  This system only works if everyone is fishing for blackfish and all are experienced. Personally it doesn’t appeal to me and I’m not sure why its necessary when there is such an abundance of good blackfish spots around our major cities. 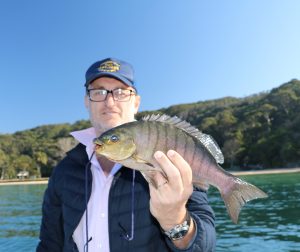 Occasionally blackfish are taken by bream or whiting fishermen on worms or yabbies but primarily they are vegetarian. The two most common baits used are cabbage  weed or river weed. Cabbage is found on ocean rocks and the intertidal zone on the lower reaches of our rivers and harbours. It is best when it is used in the areas where it is found and likewise with the river weed which is found in the upper reaches of rivers near the tidal limit and into the fresh. Having said that river weed often works well throughout the system , even around the washes on the lower reaches. River weed can often be purchased through tackle and bait outlets with Parramatta weed being popular state wide. I have never seen cabbage weed available in shops so you will have to collect it yourself.

Typical of intertidal feeders , blackfish bite best on the two hours up to the high and the first two hours of the run out . A burly consisting of chopped weed and sand dispersed by the handful every five or so minutes will vastly improve catches. They are respectable fighters , maintain a good average size ( around 1 1\2lbs ), and when skinned and filleted are an excellent feed.

If you fish for blackfish in  the harbour for long enough you will no doubt encounter the mighty surgeon fish . They are taken using the same methods as Luderick but you might consider upping the tackle a bit if you intend to fish specifically for surgeon and as mentioned before they are location specific . They are no where as abundant or wide spread as luderick   but they obviously do mix.  Deep water bridge and jetty pylons are prime locations  as are along deep reef edges in selected locations in the lower harbour. When prospecting for them I would strongly recommend fishing a cabbage bait close to the bottom (as well as your standard float rig) off a Paternoster rig  as they are caught in water as shallow as 10ft but are much more commonly in the 20 to 40 ft range . Given that we rarely present weed baits  in these sort of depths its  not surprising that surgeon fish are an uncommon capture for recreational fishos.

Article and pics by — Craig McGill