How To Catch John Dory

Any fish that you catch occasionally while targeting other species usually ends up getting labelled an incidental catch or by-catch. It is true of some species like the occasional rainbow runner, spangled emperor or Samson fish that are caught in Sydney harbour while fishing for other species, but it is not true of John Dory. Dory get their ‘incidental’ label simply because very few anglers specifically target them. Its got nothing to do with the number of dory available.
Live baiters targeting the better quality pre and post season kingies and Jew occasionally pick up Dory, which does nothing towards amending their reputation as a poor fighting fish. And that’s something I should make clear right from the start — they were not created with the sport fisherman in mind.
A handful more are caught by the bream fishermen, which for a few, has lead to the misconception that the dory should be targeted on cut baits. Those who clean their dory immediately, usually have their own theory on that one. I’ve only ever caught two that I was convinced had genuinely taken a cut bait. All the others had undoubtedly eaten the small reddie that had eaten the cut bait. On most occasions the small reddie still has the bream hook firmly embedded in its mouth. What usually brings the dory unstuck is the ant-reverse nature of the reddies dorsal spines. They go down easy head first but just try and pull one out backwards.
On one occasion it was quite obvious from the rattling tip that the bream rod sitting in the holder had picked up a small reddie or bream. But before we got to the rod it had doubled over and the spool yielded a few short bursts of line leading us to believe that we had misjudged the size of the fish. A couple of minutes later a large dory lay waiting for the net. As a matter of interest, I might add that this particular dory jumped twice during the fight (I don’t blame you if you don’t believe that). The hook was firmly embedded in the dorys mouth so we assumed that we had been wrong about the small reddie —– until we cleaned him. I dispatched the fish and cleaned him immediately only to find one, very much alive and kicking, 12 cm reddie with an obvious tear in his upper lip where the hook had pulled free, apparently after he had been inhaled. Similar incidents have occurred many times since. 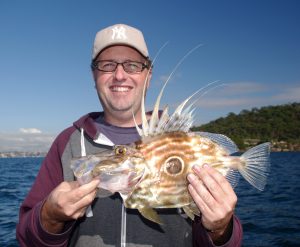 Despite the dorys sluggish, lurching appearance they are capable of lightning attacks on their selected pray. I’ve watched them in clear deep water, single out and stalk a baitfish for many minutes. When it comes time to attack though, it was with a burst of speed not unlike that of a flathead erupting from the sand to grab a mullet.
A struggling baitfish is another matter. Dory usually hang around in groups of three or four and in the case of a wounded prey its a matter of first in first served. They’ll charge straight in — proboscis mouth pumping.

They look weird and they are weird. Just before I get into the how where and when Id like to relate a couple of their weird habits.
When I was a kid I was sitting on the bank at Bantry bay and had burley up a humungous school of poddies. For no apparent reason the poddies suddenly started swimming in a big circle, all in one direction, leaving a hole about the size of a garbage tin lid in the middle.
I remember thinking that it was like Indians surrounding a wagon train. It then became apparent what was happening as a huge dory elevated up into the hole until his massive, rooster tail fin was clear of the water. He then started rotating, on the spot, at the same speed and in the same direction as the poddies. This continued for a good ten minutes until the dory descended straight down the hole, disappeared and the mullet went back to their normal chaotic feeding frenzy. This would have all been fairly self explanatory had the dory attacked the mullet but despite being within easy striking range he never attempted to. I’ve seen exactly the same thing twice since.
Another bizarre habit they exhibit regularly, is beaching themselves. Both myself and my brother have witnessed this on two separate occasions. A friend of mine who fishes the shores at Roseville has seen it happen a couple of times and one of my charter clients mentioned that he had seen one jump up on the boat ramp at Roseville. In every case the fish appeared to be perfectly healthy and for as much as we could see were neither chasing or being chased.

Dorys distribution extends around the southern half of Australia but the main concentrations are in southern NSW. They are however found as far north as Bundaberg in QLD. During Summer they live out offshore on the deepwater reefs and according to divers I’ve spoken to are also common around wrecks, particularly those on a sand bottom. Offshore, they are occasionally caught by bottom bouncers targeting other species and live baiters after kingies or jewies, but like the inshore dory they are seldom specifically targeted.
I’ve read reports of dory growing to over half a meter and four kg in weight but according to Grants Guide to Fishes the biggest actually officially recorded was four hundred mm. The biggest I’ve personally witnessed was more in line with Grants and weighed about two and a half kg.
They move into the bays and harbours in May and retreat back to the offshore reefs in about September. It is believed that they come in to breed and as virtually all of the large dory we catch are roed up, then this theory is probably correct. 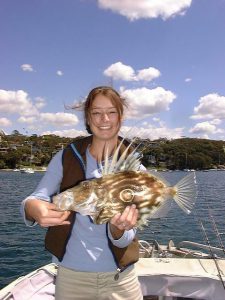 They tend to favour the deep clear bays and harbours and are rarely taken in shallow or muddy rivers or estuaries. During the cooler months they are well worth a shot off the deep-water rock platforms favoured by the land-based game fishermen. My cousin used to spear plenty of them off the Avoca rock platform
Once they move inshore they will congregate, often in large numbers, in the still deep bays well away from water movement. I know of a few spots in Sydney Harbour where they do hold in the main channel but it is on the front of a dramatic drop off where I assume a deep eddy occurs. Moored yachts and jetties seem to be a major attraction to dory, either for the shade they create or the bait fish they attract — probably both. Their attraction to jetties puts the land based fisho’s in with an even chance.
If you are having trouble deciding where to target Dory just think about that one spot where ten-centimeter cockney bream drive you nuts. That will be a great spot to start.

Live baits are obviously the only way to go —- just take a look at that mouth. Small reef type fish are the ultimate but yakkas or slimys will do. If you are forced to use yakkas or slimys then make sure you slow them down, to dory speed, by trimming the tails. You do this by simply cutting the fin section of the tail with your line snips or pliers. Don’t cut the actual tail as this will eventually kill the bait. Dory live close to the bottom and are slow moving which is what makes reef fish a much better bait —— its their natural food. You won’t see them in hot pursuit of a school of slimys or yakkas. Ideal baits are things like Mado and sweep but almost any small reef dweller is worth a go. I’ve watched a dory circle a yakka with only moderate interest for ten minutes. As soon as the yakka was replaced with a Mado the dory charged in without hesitating and scoffed it.

You don’t need heavy gear to fish for dory. Having said that I would still recommend at least six or ten kg. As I said earlier dory are a poor fighting fish so even on very light line you are not going to get much out of them. Given that you are not going to get a fight out of them either way, then I would strongly suggest using heavier line due to the very real possibility of picking up a much larger fish like a kingie or jewie on your live bait.
Fish straight down below the boat. To set your depth drop your rig to the bottom without the bait. When you feel the sinker hit the bottom lift it up about two meters and set your rod in the holder. Now pull the line up by hand, pin the bait and send it back to the bottom. This way you will know exactly what depth it is at. If you try and set it with the bait on you will never know exactly how deep you are due to the fact that the bait is always towing the sinker.
Fish at least one rig cast away from the boat, right on the bottom, especially if you are in shallower water. On the subject of water depth, I like to fish in anything from 20 to 70 ft.
The rig is simple, consisting of a forty gram bean sinker on the main line terminated with a swivel. That is then tied to a nylon trace of about ten kg breaking strain, finished off with a 4\0 to 6\0 Mustad ‘Big Red‘ chemically sharpened hook.
The most effective method from the jetties or shore seems to be suspending the above mentioned rig ten to twenty feet (depending on water depth) under a bobby cork with the use of a running stopper. If the water is deep enough off the jetty you can fish straight down amongst the pylons.

Right on high tide and the first hour of the run out is prime time especially if this occurs early morning or late afternoon although it is possible to pick up the odd one right through the day. 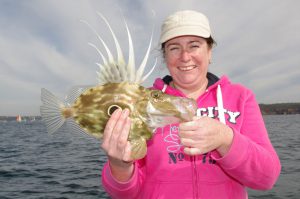 Use plenty of burly when dory fishing. Although the burly doesn’t directly attract the dory, it attracts clouds of bait fish which are of great interest to the dory.

On a final note, the ‘s a few stories as to the purpose of the huge black spot on the side of the dory. Europeans suggests that the mark was made by Saint Peter’s thumb and finger print when he picked up the fish and extracted money from its mouth. Scientists say it represents a large eye used to give predators the impression that it is a much larger fish. Personally, I favour the spearfishermans theory — that it’s a ‘bullseye target’.