How To Catch Groper and Drummer

Due to their habit of diving straight for cover as soon as they are hooked , light sport tackle is definitely out for these two species. A strong 12ft rod in either 6 or 8 rap with a light tip coupled with a large E type alvey would be a good start if you are rock fishing. For boat fishing I use my standard 50lb kingfish gear for groper and a sturdy medium spin outfit for Drummer.  The light tip on the rod is essential for casting the lightly or even unweighted baits often used around the rock washes. For the same reason, the temptation to use very heavy line must be avoided. 30 to 50lb braid appears to be the best compromise being light enough to cast the light weights and also having the grunt needed to pull these powerful fish away from cover. Besides that you would be doing well to exert any more than about 30lbs of pressure with a 12 ft rod.   In really good conditions you can get away with using no sinker at all. The baits used , especially cunjevoi, have good casting weight on their own but in rough ,windy conditions may require the addition of a small ball sinker to help them down through the water column.   My favourite hooks for both drummer and groper are the Mustad hoodlum 1\0 for drummer and 5\0 for groper. The hook is tied straight on to the end of the line , no trace , no swivel , just a small free running ball sinker if it is required. The reason for such a simple rig will be clearly understood when you have re-riged for the twentieth time after bust-ups or snags. When fishing for groper straight under the boat around the deeper reef areas I use my standard kingfish rig of a no.4 bean sinker above a swivel and then onto 50lb mono leader. 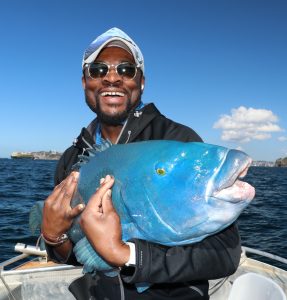 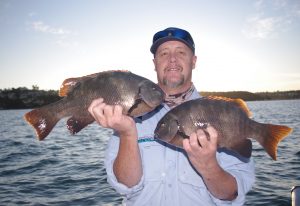 Fresh cunjevoi is the number one bait for drummer with live red crabs being the groper’s favourite tucker. There is an overlap in the two species diet which includes things like marine plants (weed) and a huge variety of shellfish including prawns. Drummer also have a taste for bread.  Collecting cunjevoi and crabs is an exercise that must be done with extreme caution. Both these baits are found on the intertidal zone and when it comes to ocean rock platforms this zone can represent an extremely dangerous area.

Burleying , especially for drummer ,  is highly successful. My mix consists of the following ; half a bucket of sand mixed with two loaves of bread ( and water of course) with a couple of handfuls of chopped cabbage weed. Once this is thoroughly mixed it is then packed into the left over cunjevoi shells , once the cunjevoi has been removed for bait. This then acts as a handy burly bomb that can be thrown a good distance and disperses the mix evenly as it sinks to the bottom. 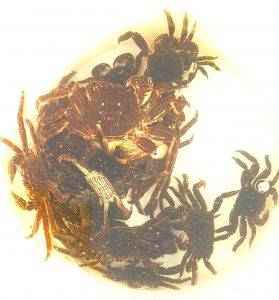 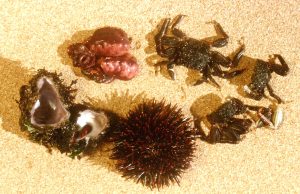 Groper are found all around the rocky foreshores from south-east Queensland around the south coast to the lower region of WA. They can vary in colour from the bright blues found on the big ones right through to reds and browns found more commonly in the smaller fish.  They are most common along the sections of rock with a high food content. These areas are evident by lots of weed growth , shellfish , cunjevoi and if there ‘s a bit of white water washing over it , all the better. Groper will come into shallow water but they tend to be very hard to extract from these areas so I usually opt for the deeper areas.

Drummer can be divided into two species, the silver drummer, correctly named (or buff bream as they are known in WA) and the black drummer which is not a drummer at all but actually the rock blackfish (not to be confused with the luderick which is also known as blackfish). The two species are unrelated genetically.  Black drummer are confined almost exclusively to NSW, while silvers are distributed right around the southern half of Australia and even overseas. They are both a schooling fish and are found in much the same habitat as the groper. 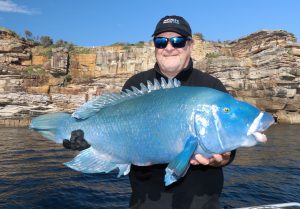 The technique is very similar to that known as wash fishing. The unweighted or very lightly weighted bait is flicked into the selected area and is allowed to do its own thing. You may find that you need to feed some line out occasionally to give the bait a natural , free floating appearance. There is very rarely a bite as such  from a big groper or drummer, just a tightening of the line as the fish moves off. Take up the slack , strike hard and hang on — adrenalin will do the rest.

The benefits of perfect conditions for grouper are twofold. Firstly calm seas give access to some of the knarlier locations that grouper seem to prefer. They also seem to feed more actively on the top half of the incoming tide. This ties in perfectly with the second, but equally as important half of the success equation–bait collecting. Ideally you arrive on the dead low tide on a nice calm day and spend the first couple of hours collecting crabs and maybe a bit of cunjevoi by which time the tide has reached the groupers optimum feeding period.  The crevasses and football sized pot holes on the intertidal zone is where the red and green crabs lie in wait of the incoming tide at which time they make their move in search of food and new territory. At this time the grouper make their move, taking advantage of the newly accessible food source and not just the crabs but also the less mobile source such as urchins, starfish and the numerous varieties of shellfish. Red crabs, the preferred variety, are generally found much closer to the waters edge whereas the green crabs or scotchies as they are sometimes known are found as far back as the rubble pile at the back of most platforms.  If there’s one thing that these little critters like better than thick weed growth that’s being upside-down under a ledge, a similar trait found in most crustaceans as those of you who dive for crays will know. Being a bit of a wimp I find a glove allows me to explore a crevasse more aggressive which more than compensates for lack of feel and defiantly saves the hands from the numerous cuts and spikes otherwise incurred. You never really know exactly what you are going to grab down there and apart from crab bites there’s urchins, eels, barnacles and if you are really lucky you might even grab a blue ringed ocky, especially considering their favourite food is crustaceans. 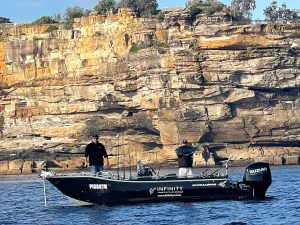 I’ve found that crabs stay alive longer in wet weed rather than a bucket of water, especially the scotchies. So a bucket half full of kelp or any weed for that matter, with a lid, as they are the masters of escape, kept in a cool place is the go. If you want red crabs then you must be prepared to get wet and place yourself in some dicey country. It’s a dangerous pastime and all precautions should be observed including having a mate on watch to warn you of incoming waves. Red crabs require skill and total commitment. If you are fishing in winter and have drawn the short straw then bring along a change of clothes as you are almost assured of getting wet. As a consolation the effort involved in collecting reddies is well worth it. Red crabs need to be kept in water so a 20lt bucket with a good aerator is a necessity. Collecting green crabs is generally a much safer affair as they are found under ledges and rocks well back from the waters edge. A singled pronged spear, which does nothing towards keeping them alive and healthy but is sometimes the only way, and quick reflexes is all that is required for gathering green crabs. Other suitable baits include sea urchins, shellfish, cunjevoi, starfish, prawns and abalone gut (banned in NSW) if you can get it. Most of these baits have bag limits on them so check before you go collecting . Sea urchins attract plenty of bites but the effort involved in placing them on the hook sometimes becomes too much. Perhaps strapping the hook to them with a rubber band or something might work but I’ve never tried it. Grouper will take cunjevoi occasionally but it usually gets snapped up by something else first. Green king prawns and abalone gut are reasonable alternatives if local baits cannot be obtained.  It’s best to use the crabs live if you have a good supply. There are drawbacks to this in that the crabs, upon reaching the bottom , will latch on and bury in, usually resulting in a bust off. On the positive side, if grouper are present then a live crab rarely makes it to the bottom. Cutting them in half longitudinally is the other alternative especially if you are low on bait. 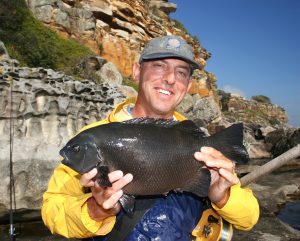 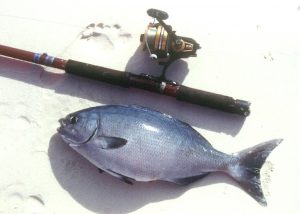 The tackle required for grouper is fairly simple in both the outfit and the terminal gear. An alvey reel is ideal for rock fishing and my personal preference is for an E type. The E type is not common but does have the advantage over the A type in that it is direct wind, that is the handles are bolted directly to the spool. It still has a star drag system but if you decide you want to crank then you can bypass it. The A type doesn’t have this option but is still superior to any other type of reel as you can still clamp down on the spool with your hand. Alveys also enable light weights to be cast on relatively thick line. A 12 foot rod in at least a 6wrap, preferably an 8wrap completes the outfit. I use a MT 144 8w Snyder. My preferred line class is 40lb which I find to be the best compromise between castability and workable breaking strain. I know people who use 70 lb line but they must have trouble casting I doubt any one could exert any where near  70 lbs of pressure with a 12 foot rod.  A pea sized, or smaller ball sinker is threaded on free running and then the hook is tied straight on – it’s as simple as that. I use no trace or swivel. Yes, I do run into line twist problems and occasionally have to let the line out on the rocks, without hook and sinker, and wind it back on, repeating the process 2 or 3 times until the twist is gone. The problem is not as bad as you would imagine though, nothing like it would be if you were spinning for tailor with pilchards for example. Occasionally having to untwist your line is defiantly much easier than having to tie on a swivel and trace 20 times a session.

Black drummer are quite good to eat but must be must be fileted skinned and have the black lining and rib cage cut out. Silvers are a challenge to eat and most people I know release them. Groper are good eating but I have a strict policy of only keeping the smaller ones. I release all the big Blues. Groper have a bag limit of 2 fish per person. 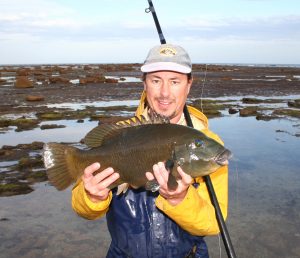 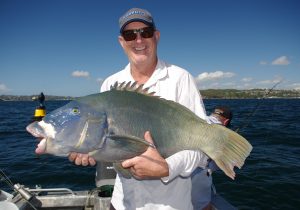