How To Catch Bream In Sydney Harbour

If you have a bait in the water , almost anywhere from the heads to the freshwater , sooner or later you are going to catch a bream .  They are an abundant and diverse species so it doesn’t matter weather you are fishing in the freshwater reaches of the Hawkesbury or around Sydney heads, you are in with a chance . At certain times they will feed in six inches of water. During their Autumn spawn run they will show up in the deep holes on the lower reaches in anywhere up to 100ft deep. They will accept almost any bait and in the right situation they are common on lures. So as you would imagine, with this diversity, it shouldn’t be hard to catch one.

Catching ‘one’ is easy but to catch bream of quality and consistently is another story. Just like any fish, a specific approach is required if you intend to catch them as a ‘target species’ rather than a one off catch while general fishing.

Here in Sydney we are blessed with some of the best bream habitat in the country. My two favorite systems, Sydney harbour and the Hawkesbury, provide the opportunity to sample virtually every style of bream fishing available. While the Hawkesbury offers large numbers and arguably the biggest bream in the country the harbour provides consistency and unbelievable lure fishing. 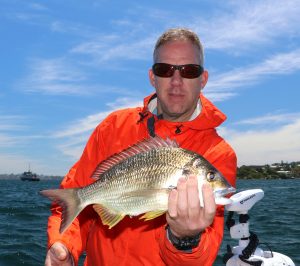 Bream are an opportunist feeder. That means that they will have a go at anything in their path. To what extent they will go to find food and what they will accept or reject will basically depend on two things. Number one determining factor in what they will eat is how hungry they are. A really hungry bream will eat anything, anywhere, any time.

Second consideration assumes that they are reasonably well fed. When a bream has plenty to eat is when they are most likely to get fussy. Furthermore well fed fish are more likely to go off the bite for periods and when they do feed it will be in prime time. Prime time is the period that most suits the fish in respect to light levels, tide movement and accessibility to the food source.

If bream have been working an abundant worm bed it is less likely that will accept a, less than fresh, cut bait. At these times you will probably need top quality baits like live worms, nippers or live prawns. Bait selection also depends on the area and time of year. It is wrong to assume that top quality live baits like worms and nippers are always going to be the best producers.

I was fishing with a mate who had bought along some live blood worms. The water was deep and murky and the bottom was rugged. To our surprise we couldn’t loose a worm and caught all the bream on mullet gut. Obviously in this situation the fish were feeding on smell rather than sight and the gut put out much more odor than the worms. I have found that the smelly baits like mullet and chicken gut and skirt steak work much better in cloudy water than in clear water. This becomes very evident after floods where the water is dirty and turbulent. 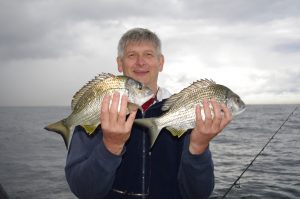 The smaller the fish the more likely it is to accept any bait. This is due to the fact that growing fish simply require more food per body weight than slow growing mature fish. So if your target is big bream then you are going to have to pay more attention to bait selection. An examination of a big breams teeth and gut content usually reveal that they are accustomed to cracking shellfish and crustaceans. Gut content nearly always contains shell of some description. Black crabs and estuarine mussels or pippies, live or at least fresh, would be the obvious choice.

If you choose to fish packet bait then prawns, mullet or chicken gut, skirt steak and chicken fillet are good options.

If you want to go to the trouble of catching your own bait then pippies, mussels, worms, yabbies, black crabs, prawns and pistol prawns would be a good start. If you can work out how to get oysters to stay on the hook, I imagine they would also be a top bait. 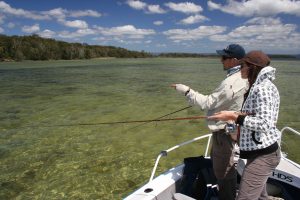 You will notice that most of the above mentioned live baits are creatures of the inter-tidal zone. Accepting the fact that these are the breams favorite food then it becomes obvious that the intertidal zone is where bream will do a lot of feeding. Access to these spots only occurs at high tide. Given that the bream will be working the shallows they are going to be spooky. A quite approach is necessary. If you can get a high tide early morning, late afternoon or at night then all the better. If you have to fish daylight hours then look for the heavily shaded areas.

There’s a couple of methods for fishing the intertidal zone. You can fish from a boat back towards the deep shore lines by setting one anchor out in the deep and one up on the shore. With this method baits are usually presented unweighted or at most very lightly weighted. Because the boat is in deep water you can fish much closer to your target. 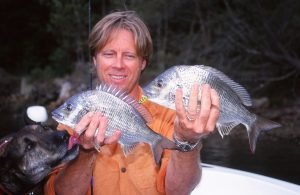 Fishing up on the flats requires a different approach. You must anchor the boat both front and back in order to stop it swinging. With the boat anchored in only 3 or 4 ft of water you will not be able to fish close to the boat for obvious reasons. In this situation I would suggest using a heavy sinker to enable you to get the bait well away from the boat. It is critical with this method that the sinker be free running.

Once the bream move off the intertidal zone, at low tide, they will school up in the deep holes. Depending on how much feed they got at high tide, they are still catchable at this time. I find they come on the bite around the turn of the low tide. At places like the Vines on the Hawkesbury this is often the only time you can fish due to the otherwise strong currents. In this situation a bit of burly can be very effective.

In spawning time, usually early autumn, the bream will congregate in the deep holes and channels around the mouth of the system. They can be caught in large numbers at these times so self-regulation must be exercised. Fisheries regulations allows a bag limit of twenty per person but obviously if you have three people fishing on your boat then sixty bream would be quite an obscene catch.  Because of the deep water a light approach is not always possible. More often than not you will have to use large sinkers to reach the bottom. Just how much weight you will actually need will depend largely on the strength of the current.

With large sinkers I would recommend using a long leader of at least one meter, to keep the bait away from the sinker. The deep water can be successfully fished throughout the day especially on an out going tide. 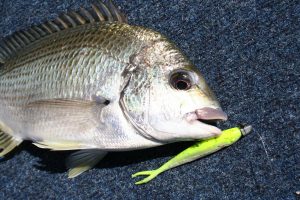 Best Tackle:  Tackle for bream remains pretty much the same weather you are fishing the flats, the deep or even lure fishing. I prefer an egg beater reel as it allows you to flick light baits and lures more effectively than most baitcasters. This becomes even more obvious at night.

A reel capable of holding about 150m of 4kg line is adequate. 4kg line is a good average but you could go as low as 2kg or as high as 6kg depending on what weight you are casting and the type of terrain you are fishing in. Obviously if you are fishing around oyster covered rocks then 6kg would be more appropriate. If you are fishing over a clean sand flat them there’s no reason you couldn’t get away with 2kg.

There are two types of rods that I like to use. For flicking lures or in situations where baits need to be cast some distance I prefer a light spinning rod of about 5.5 to 6ft. When I’m fishing the deep water I find the Quiver tip style rods, of about 8ft to be the most effective.

Weather I’m spinning or baitfishing I like to use a nylon trace of about 4-6kg. The length varies with the style of fishing. To join the trace to the main line a no. 14 swivel is ideal. The sinker always goes on the main line and the swivel stops it from running down on to the hook. I prefer a VMC baitholder style hook from about no. 4 to 1\0. The hook is selected to suit the bait not the fish. 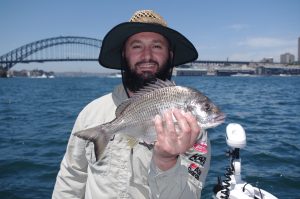 The Parramatta River, Lane Cove River, Middle harbour and much of the upper reaches of the Hawkesbury including its tributaries have, over the last few decades, developed into a Mecca for bream spinning.

The best fishing occurs either right on the shoreline in the deep water or over the extensive mud or sand flats. Rock bars and boat moorings also produce very well. The very best spinning happens in less that four ft of water

There’s no doubt that bream spinning in the above mentioned areas is a high tide proposition. The vast mud flats of the Parramatta River, where the best fishing occurs, are inaccessible at low tide. Trolling around the moorings and in close to some of the deep shores can have its moments.

Right Techniques:  Casting, the preferred method of most spin men, is usually directed at structure. Mostly its done at anchor but in perfect conditions drifting with a little help from the electric motor or oars is highly effective.

Trolling a pattern over the flats can produce some incredible fishing at times. We’ve had triple hook-ups and even lures sitting stationary in the water have been taken while playing another fish. Trolling is a good option once the tide recedes off the flats or when conditions are unfavorable for casting. Trolling is a good method of locating fish on the slow days. The Storm Hot-n-Tot or Wiggle Wort are so far ahead of any other lure it’s not funny. They are light weight lures but with very light line it can be done on the right tackle. Tiny soft plastic lures are also an extremely effective lure for bream.

The great thing about bream is that they are just so accessible to everyone. They are great to eat and  , on light spin gear  , are sensational sport around the snags. But best of all they are no push-over , requiring skill and patients to catch and this makes them a worthy opponent.

Article and pics by Craig McGill 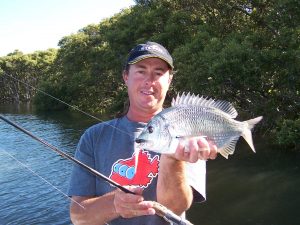 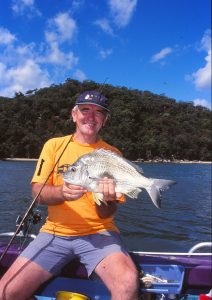 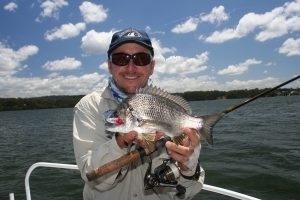 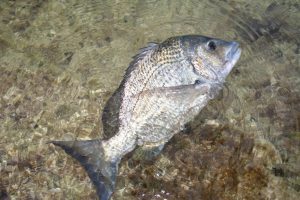 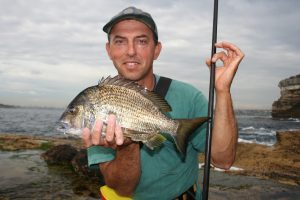 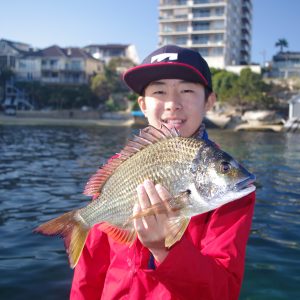