Not that I’ve ever experienced it myself, but it appears that the average fisho will only get away with so many ‘boys fishing holidays’ before their partners start demanding justification.
And fair enough too, how would you react if your partner came home and announced that she was going on her third annual ‘shopping’ week with the girls and it was costing six grand.
Sure there are a very few dedicated fisherwomen who would be more than happy to spend a week fishing in the mangroves with you and the boys but don’t even bother trying to put that one on the average partner or family. You won’t enjoy yourself and either will they.
Hopefully by the time you get to the end of this article you will be reasonably excited about the prospects of a trip to the Whitsunday’s but here’s the really encouraging bit. As a little experiment tonight, at the dinner table, (do families still eat dinner together) propose a family holiday to the Whitsunday Islands and watch the reaction. — Guaranteed it will be favourable.
Why the Whitsunday’s remains so underutilized by fishermen has always been a mystery to me. Its access is just too easy. Either way its an easy flight or drive from Sydney, Brisbane or Cairns. Accommodation options abound and supplies, facilities and services are too numerous to mention  — but the fact that you can get a tattoo before heading down for a mixed sushi platter will give some idea of how much there is available . 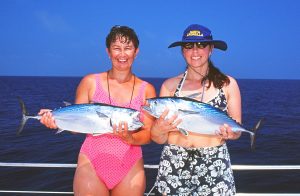 As for the Islands and the water that surround them words like postcard perfect, piscatorial plenitude and paradise plenary spring straight to mind — particularly if you have a thesaurus nearby.
I’ve done the Whitties plenty of times now over the last twenty years but without a doubt the highlight was a trip I did recently, cruising the islands aboard a bare boat charter.
The options for accessing the superb fishing that this area offers are numerous. Staying at Airlie beach on the mainland and travelling to the fishing grounds on a day by day basis is feasible although the distances involved in getting to some of the outer islands can be inhibiting.
The other alternative is to base yourself on the outer islands. There are three options within this option. You can book yourself into one of the many resorts. This is the comfortable option and gives you immediate access to the best fishing grounds. Its also reasonably costly.
A slightly less costly option is to camp ashore at one of the many designated camping grounds. This has the same benefits as the resort option with a degree less comfort
Finally you can stay on your own boat anchoring in one of the many protected bays. This gives you great mobility with camping level comfort. 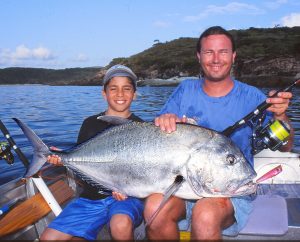 Chartering your own , hire and drive charter boats, combines the best of all the above options . You’ve got something nearing the comfort of a budget resort with showers, toilet, kitchen, refrigeration and clean dry bug free sleeping. Mobility is high on the benefits list and by using the supplied dingy or bringing your own you are basically mother-shipping.

With supplies organized the previous day we met at Able pt marina where we took delivery of the 36 ft catamaran that was to be our mobile floating home for the next week. The Whitsunday area boasts the biggest bareboat charter fleet in the southern hemisphere so there‘s no shortage of options when it comes to deciding what style of boat best suites your needs.
Sailing is not my cup of tea and with a crew of 8 we opted for Queensland Yacht Charters 36ft powered cat

After a 9am briefing we set a course for Hayman island. To cater for unlicensed skippers the boats are governed to do not much more than ten knots. This suited us just fine, after all we were on holiday and after the hustle and bustle of city life it’s a nice change to just slip into cruise mode for a while. Of course the slower pace demands feet on the dash , beer in hand a couple of troll lines out the back and insists you take in the magnificent scenery.
Just before we reached Hayman the peace was broken by the scream of ‘strike”. I cut the motor and looked around just in time to see a huge boil and a couple of feet of beak break the water roughly about where the lure should have been. I know just enough about the different marlin species to call this one for a ——- marlin. Well it definitely had a beak and a big tail so it wasn’t a maceral, which is the best we had hoped for. Mark grabbed the heavy spin outfit that the fish had wisely chosen to take and slowly worked his way around to the bow. I swapped the helm for the camera and left the chase in the very capable hands of captain Guy. Guy is ten years old so as you could imagine he’s had years of experience chasing beakies.
The marlin did all its stuff for about twenty minutes. Finally it lay boat-side after having cleverly wrapped the line around the rudder and then deciding to come back around again. We bill lifted it into the boat took a few snaps and despite the fact that this fish obviously wanted to die, we let it go anyway.
We all agreed that this was a pretty good start to our fishing holiday.

From here we went around the inside of Hayman and grabbed a mooring for the night in Blue pearl bay.
Half a dozen crazy big squid actually believed that they were safe when they took refuge in the shade of our boat. The last thing they would have heard, as they lay on the deck, was us bickering about weather we would eat them or use them for bait. There was enough to do both and we enjoyed calamari in coconut and chilly while catching Spangled emperor off the back deck as the sun went down.

While being prominently dominated by yachtys and pleasure cruisers the whitties is a fishos paradise. Strangely enough the area is grossly underutilized in this respect. Sure many a token line is dangled as part and parcel of the sun-seekers itinerary but the serious sportfisho is seldom spied. The true potential of the whitties fishing options is rarely publicized and although great opportunities abound it can take a bit of time and know-how to get it wired. Blue water and reef fishing are the obvious candidates but if you want to take it really seriously there is some great estuary and flats to be explored.
From past experience, getting the seasons right seems to be a key factor to success. November through to April would be a good start.
With a sounder, a chart and preferably a GPS the reefs are easy work. 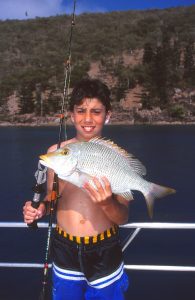 Most of our weeks action happened within half a click of the shore.
For this, there is no substitute for a keen eye. If you know what you are after the signs are quite obvious thanks to the gin clear sea, good water movement and generally calm conditions. Eddies, current lines, bombies, fringing coral ,channels and showering baitfish tell most of the story

We left Blue pearl bay early the next morning , heading south , destined for the famous Whitehaven beach on Whitsunday island. As we rounded the eastern side of Hayman it became apparent that it was going to be a slow trip. The mirrored calm surface was erupting with pods of bluefin and maceral tuna as far as we wanted to look. Like fighter planes leaving the carrier the two dingies left the mother ship in pursuit of the enemy and it wasn’t long before the drags were howling. After an hours play and countless fish we returned with two fish, one for bait and one for the evenings sushi entrée.
If you are looking for serious surface fish them the outer edge of the outer islands is the spot. We cruised the full length of Hook and Whitsunday islands and all the way we found tuna and maceral. As we neared our destination, from the fly bridge, we witnessed the spectacular sight of two giant manta rays circling each other, just below the surface of the crystal clear, dead calm sea. 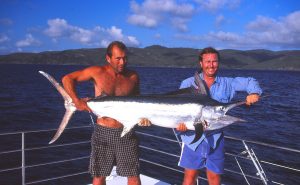 That afternoon we dropped anchor off Whithaven beach and spent the remaining daylight swimming off the beach and snorkeling on the nearby reef.
On dark we set the first baits and almost immediately hooked what was to be the first of a procession of big unstoppable sharks. I’ve played 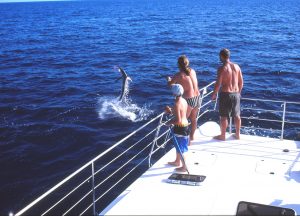 with enough sharks in the tropics to be able to make a reasonable assessment of size and I can tell you that these were big fish indeed. Even on reasonably heavy gear there wasn’t even a hint of stopping their seaward runs. It was the same every time. The shark would pick up the bait and steadily head off in the same direction. There would be no pause and at around the two hundred meter mark they would either bight through the trace , the hook would pull or the line would pop. The boys reckoned that it was the same shark coming back every time. I doubted that theory until upon retrieving, after a pulled hook, we found the trace swivel and hook from a previous bust off entangled with the rig. Even more food for thought was the fact the waters around this area was swarming with swimmers all that day and the next. After a dozen or so attempts we conceded defeat and retired to the beer deck.
Just round the corner from where we were anchored there was a little bombie that had produced well on GTs on previous trips. It was an exercise in self restraint, the following morning, driving past the schools of tuna and queenies but we really wanted to be at the bombie before the sun got too high. It paid off with four trevally to about three kgs and then the mother of all GTs. On the way back we caught a few mac tuna and observed two giant turtles mating on the surface.

There are a few hidden pockets of estuary fishing tucked away on the outer islands. Gulnare, macona and nara inlets all hold typical mangrove species but the jewel in the crown is Hill inlet at the northern end of Whithaven beach. This scenically spectacular estuary flows over the same pure white silica sand that makes up the beach and as a result offers some of the best estuary sight fishing available anywhere. This mangrove lined estuary offers outstanding fishing for estuary cod. Other species available include jacks, trevally, Barra, grunter and in the deep holes even the occasional reef species like Spangled emperor show up when bait fishing
Sight fishing on the flats at the mouth is awesome. It’s a great spot for fly fishos targeting trevally, queenies and barracuda. 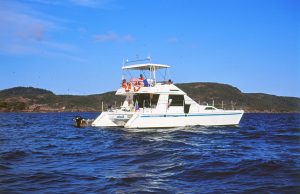 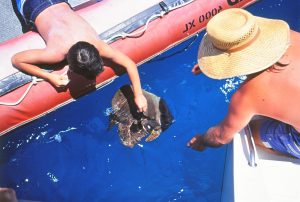 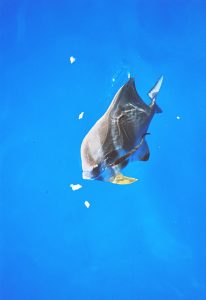 During our week we only touched on a tiny portion of what this area has to offer. We cruised past and I’m sure over the top of, hundreds of likely looking fishing spots that you couldn’t fish in a year let alone a week. We swam, walked the beaches, snorkeled, visited aboriginal rock art and night clubbed back at Airlie. There’s countless island resorts that welcome day visitors , scuba diving, rainforest walks and sea plane flights over the great barrier reef just to name a few of the things that we didn’t get time to do.

If there’s one thing that our week here highlighted and that is that a week is no where near long enough.