Over the course of your fishing career you’ll be lucky enough to come across a few fishing spots that will fit into your ideal destinations profile. There will only ever be a handful of them, otherwise they wouldn’t be ‘special’, and they will be based on a criteria that best fits your fishing style preferences. For some it will be freshwater fishing on tiny streams and everything else right through to the open blue. One man’s ‘honey hole’ will be another’s cesspool. For me it’s the mangroves and freshwater reaches of our coastal estuaries and I’ve just been lucky enough to add another one to my short list. 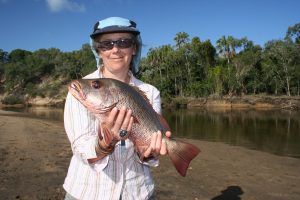 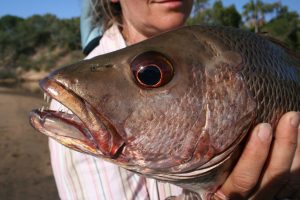 I was first introduced to Deepwater creek by fishing journo Alex Hickson while on a holiday at the town of 1770 just north of deepwater.  While the fishing was slow that day I got enough of a taste to make me want to come back. The waterway was pristine and scenically spectacular enough to make me realize that I could happily sit there all day and catch nothing –number one on the criteria point list. After all, fishing is ‘the exciting sport where nearly anything can happen’ — but usually doesn’t.

Deepwater is situated midway between Bundaberg and Gladstone. The best access is from the south via Baffle creek and is all sealed road except the last few K’s which is high quality gravel road suitable for 2wd and trailers. You can come in from the north via the town of 1770 but it’s a bit of a sandy track best suited to 4wd. I pulled a small tinnie through there with a Prado no probs but it is sandy, winding and slow. 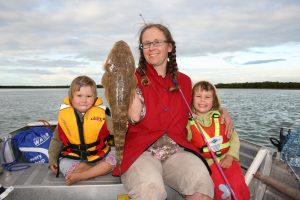 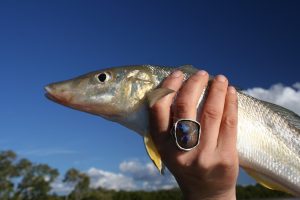 Now here comes the catch to Deepwater creek which is both its saviour and its burden. There is only one practical public access point (ramp) and it is way up on the top reaches of the waterway. It’s a dirt ramp and only suitable to small trailer boats. It’s a fair trip by boat down the more productive lower reaches. Having said that, there is some spectacular brackish and freshwater lure fishing to be had on the upper reaches during summer. The upside is that this poor public access means that the creek gets little pressure and hence has remained in very good condition.  During our week stay we saw a mere handful of fellow fishers. You can camp at wreck or middle rocks in deepwater NP to the north or stay in town at Baffle creek and travel to the upstream ramp. Or, do the smart thing and book yourself in to Broadwater Haven situated on the waterfront at the mouth of Deepwater creek. Broadwater Haven offers the only accommodation on the creek in the form of extremely well appointed 2 bedroom cabins. The big up side of staying here is their private boat ramp. It must be pointed out though that it is not an all water ramp and you will need to pick your tides. I picked a week where there were early morning and late afternoon highs. You will find that they occur around the new and full moons. Additional facilities include laundry, barbeques with good outdoor crab cooking facilities, cleaning table and hose down for your boat and gear. If you don’t have a boat there are kilometers of flats to be waded, beach access (at low tide) and good river mouth fishing all with walking distance of your accommodation. You can pump nippers and catch mullet with a cast net right in front of your cabin. There are a few sandflies and mozzies after dark but in manageable numbers. All in all a fantastic family location at very reasonable prices. 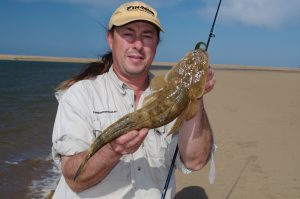 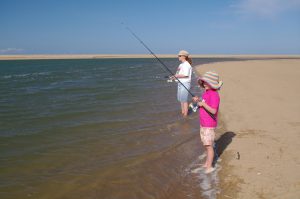 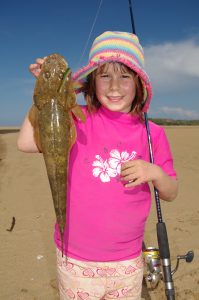 At its mouth the creek is typical of most coastal estuaries being broad, sandy and generally shallow albeit with a well defined channel.  There are some scattered mid stream snags and a few deep holes that remain fishable, on foot, on even the lowest tides. The flathead and whiting fishing down here is first class.  Heading up stream you pass some fairly typical mangrove country running for about a kilometer. Now you meet the first branch in the waterway and this is where the real fun begins. 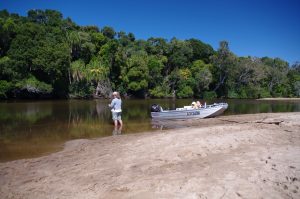 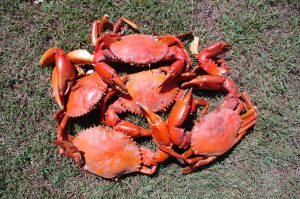 The creek is fringed by tall forests of swamp mahogany, paperbark and cabbage palms. In places the palms hang over the water creating an atmosphere of some far off tropical postcard paradise.  The creek is now punctuated with sandbanks, mangrove islands, shallow runs on the straight stretches and deep gutters on the bends. Expect to have to get out and push in some spots on very low tides. The reality of this unique waterway hits home when you realize that you can utilise this idealic vista without fear of being devoured or stung by some of the nasties that inhabit the more northern tropical ‘paradise’ waterways. And this is one of the big up-sides of deepwater creek – it produces all the species and experiences of tropical creek fishing in a very ‘family friendly’ environment. 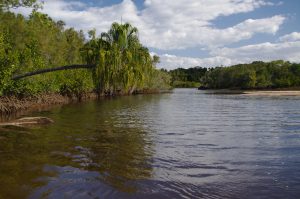 The creek is narrow at low tide, the best time to fish it, so a lot of our fishing involved pulling the tinny up on the sand on the shallow side. From here we either fished from the boat if we were bait fishing of walked the sand if we were flicking lures. The deep side is an easy cast away. One of the other pleasures of Deepwater is its lack of mud, even well up stream. It runs parallel to the coast for most of its length and in most spots there is only a sand dune or two separating you from the ocean. You can hear the surf wherever you are, even way up stream and can walk the banks, mud free, in a lot of spots.

Other features include plenty of snags, a few rock bars and some good deep holes on the tight bends and major junctions. There is a particularly good hole at the junction of deepwater and Blackwater creek. Blackwater creek, so named for its tannin stained water, branches off to the left as you are heading up stream.  It’s got a good rock bar and some deep holes with big timber snags. It runs through some spectacular rainforest for a few kilometres before terminating at a weir, above which is freshwater. The main branch of deepwater creek similarly runs for many kilometres through brackish, tannin stained water before also reaching a weir. Above the weirs is canoe country and could well be worth a prospect for barra. 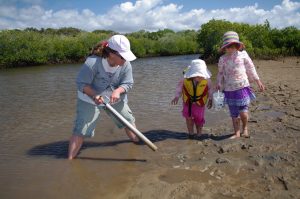 The lack of mud doesn’t seem to deter the mud crabs which were around in good numbers — even in winter. We got more than enough for a feed by simply dropping the pots in on the way out and checking them on the way back. The other nice thing here is that our pots didn’t get swept away by a raging current, chewed by crocks or sharks or taxed by the yokels — problems ever too common on many QLD waterways.

Bait gathering is easy on deepwater.  We had no problem getting plenty of mullet in the cast net and nippers on the sand banks from the mouth to well up stream.  Lure fishing filled any remaining gaps.

You can expect a nice mix of southern and northern estuary species at deepwater. Flathead and whiting are abundant during the winter months. If you targeting the more tropical species then November through to May would be a good time. All your tropical species show up sooner or later but this creek is a special for jacks.  We caught blue salmon  , estuary cod , GT’s  , jacks , flathead , grunter , whiting  , plenty of crabs and a great session on tarpon. Queenies, threadfin salmon and even barra make an appearance occasionally.  The locals told me that a naturally occurring fish kill some years back revealed an astonishing number of barra from the upper reaches. They were mostly small but enough in the 4 kg class to keep the anticipation brewing.

If you are keen to show your family a bit of a pseudo tropical creek adventure without the long dusty off road trips and bitey, stingy dangers of more remote locations, then Deepwater is a first choice.

Article and pics by — Craig McGill 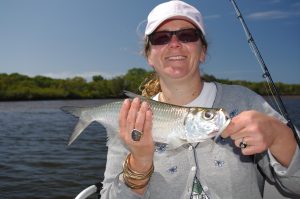 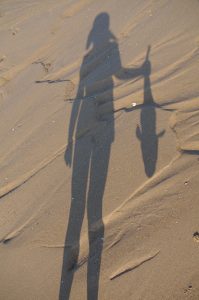